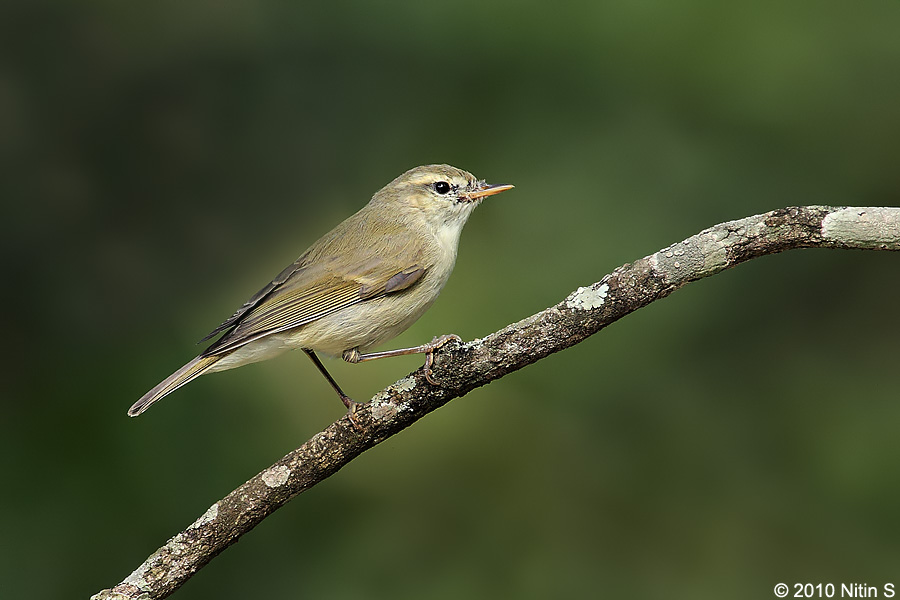 The Greenish Warbler (Phylloscopus trochiloides) has arrived in Bangalore, Karnataka, India and the surrounding states. This cute little bird is naturally found in the North West Indian foothills and plains. It breeds in the Himalayas, but in the cold weather comes down south to avoid the harsh winters of the north! Central, Southern and Eastern India are its ‘wintering’ grounds and birders on my egroup are excitedly sharing with one another emails on whether any of them have sighted or heard the little bird!

Look out for it in the greenery in gardens across southern, central and Eastern India, foraging in canopy and sometimes revealing itself at lower levels. It eats insects being an insectivore and it’s interesting to watch it hovering and sallying forth to catch insects in flight.

The birds are an olive green, the colour of moss. The eyebrow area is yellowish white, long and narrow which broadens interestingly behind the eye. The Greenish Warbler’s wings are plain with a single whitish wing bar and its legs are grayish brown.

The call which the birders are listening out for is a loud disyllabic tchii-slii.

“ Have been straining my ears to hear the call of the Greenish (Leaf) Warbler...one of the first migrants to arrive here, without any luck. I do not know if others are also of the same opinion...let's see if my luck improves!” says Arun Nandavar to the birding e-group.

“ I am really thrilled to say that without doubt, I heard the call of the Greenish (Leaf) Warbler early in the morning (6am)., today (2nd October 2010) at the Mini Forest, J P Nagar 3rd Phase. After going to Nandi Hills and other distant places to sight this bird....it was a real joy to hear the call right at my doorstep! I waited for my friend AMS (an avid birder from Delhi) to arrive, and when he played the call, I was sure, and decided to post to the e-group. I'll be hanging around the Mini Forest for the next few days, craning my neck.....wish me luck with the sighting, too!”says an excited Deepa Mohan.

“ Just to add to the Greenish warbler reports, I just returned from BR Hills and they are all over the place. We could hear them in the sholas, around the settlements in the moist deciduous forest and up to the settlement of BR Hills. With some help from a friend, we were able to note that both (sub)species nitidus and trochiloides were around, “ says Prashanth NS

An interesting post was the fact the Climate Change could be the reason for the birds arrival earlier than before. “ I had reported almost a few weeks back that there were Greenish Leaf Warblers in my Jackfruit tree(Visweshwarapuram). And Krishna was wondering as to how the migrants were arriving earlier than before. This could be a serious issue if seniors can note about it and make a comment for the benefit of the group. Is it because of climate change or what?” asks a curious Deepak Arya

While Prashanth NS tells the group that, “Yesterday I heard call of same at Chitrakaka Parishath campus in Bangalore. So they are really in town!!”

Keep your eyes cocked and ready, as you may be lucky to spot our wintering Greenish Warbler visitor from the Himalayan foothills in India, holidaying in the South!

Comment by Marianne de Nazareth on October 26, 2010 at 15:14
Mike could you please make the text reverse whilte? Thanks!