Hungarian National Bureau of Investigation is conducting an investigation into the suspected professional misconduct which lead to mass fatalities, related to disaster of red toxic sludge leakage from aluminium factory in town Ajka in Hungary.

On Friday, during his visit to the stricken area, evacuated village Kolontar, prime minister Viktor Orbán said that this case would not be dealt with according to "formerly accepted standard practice". Orban concluded that "more than likely that human error, negligence or other misconduct had played a role". 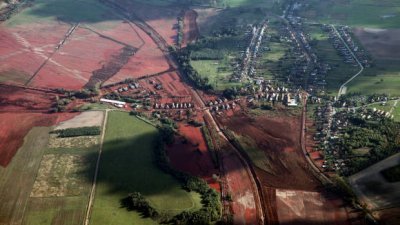 Earlier, MAL company management claimed that huge leakage is "natural catastrophy". "The management figures that it would not be able to detect the signs of the natural catastrophy or could be able to do anything to avert it. The last physical daily inspection and laboratory analyses of last the water sample from monitoring system did not show any sign of the disaster.", states the management in press release last week.

According to the Hungarian Criminal code, punishment for a professional misconduct, causing death of one or more persons and hazards to human health, could be imprisonment of between two and eight years, if the crime results in the death of more than one person, or in mass fatalities.

One million cubic meters of red toxic sludge leaked after corner wall of the huge reservoir collapsed Monday, 2nd October, and the hazardous content flooded several villages primarly closest Kolontar, with 800 inhabitants. Government estimates the total affected area is from 800 to 1016 hectares, 1737 people and 423 vehicles participate in rescue and cleaning operations, seven people died, 150 are injured and one person is still missing. Officials estimated the disaster as the biggest ecological catastrophy in Hungarian history.

Hungarian media report MAL does not even have construction plans of the reservoir. "As far as I know, MAL Zrt has not been able to find the construction plans so far because the company tried to get them from me the other day, but I do not have them, either. Thus this problem needs to be examined thouroughly. I cannot judge if the present owners of the company were supposed to know about the mistake in the planning., said MTI agency Guztav Winkler, professor at Technical university in Budapest. 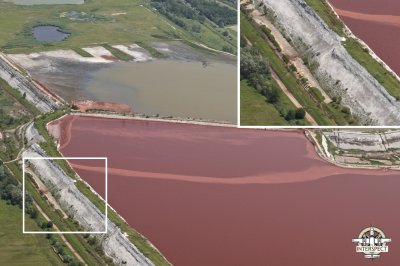 Aerial photo of the reservoir taken in June shows the wall was in bad condition (WWF, Interspect)

He stressed the problem may be in structure of the soil where the reservoir is constructed 30 years ago. "An enormously powerful and sudden impact might have caused the disaster, but the problems started back in the days when the reservoir was planned because the northern wall is situated on a spot where two different kinds of soil meet. I urge physical examination of the site as soon as possible, before the emergency and reconstruction works, or natural and weather-related events wash away the traces that might help us find the causes of the disaster. If soil is made damp by rain it moves, and different soil structures move differently. These movements of only a couple of centimeters might have strained the wall of the reservoir. This theory is supported by the fact that the disaster happened at the point where the two soil structures meet, and this can be seen not only on the corner where it broke but at another spot, too.".
World Wide Fund for Nature released on Friday an aerial photo taken in June showing a damaged and leaking sludge pond with wall, on opposite side of the collapsed, in bad conditions. It remains unclear why WWF did not show the image to MAL management.

The photography was taken in June, confirmed Gabor Bako, director of Interspect, the company that photographed the reservoir.

Besides the fear of new leakage of the rest highly toxic sludge from the reservoir, the public is very interested in the investigation. "The government seems very determined to find out what caused the disaster and to bring people to justice if it is proved that it was caused by human error. However, we do not know yet if it was preventable or not, the investigations are underway.", says Anita Kőműves, journalists of Hungarian daily Népszabadság.

She considers MAL company deserves criticism for several reasons. "As I already mentioned, the investigation is still underway. But one thing is sure: MAL Zrt is also undergoing a communications catastrophe. Their leader answered questions about the disaster quite late after it happened, and they continuously tried to suggest that the catastrophe was not so bad after all. One person said that it was not toxic, people just have to wash off the mud from their houses and it will be all right. Obviously, it turned out since then that it is a highly toxical material. There was also a meeting with local people a couple of days ago, but the CEO of MAL Zrt did not go there and instead sent a lower-level employee who was not authorised to make decisions. Also, many people were angered by that fact that Mal Zrt offered 100 thousand forints of emergency help (about 350 euros) for the people who were affected. It's a ridiculously small sum compared to losing your house."
Army in Devecser

Latest Governmental data shows red toxic mud flooded between 800 and 1016 hectares of land. Additional half a million cubic meters of sludge, more concentrated with heavy metals, could leak soon after northern wall collaps,the officials said today. A near town Devecser is ready for evacuation of all five thousand inhabitants. Evacuation groups consist of 319 soldiers, 12 personnel and railway carriages, prepared for the worst scenario.#