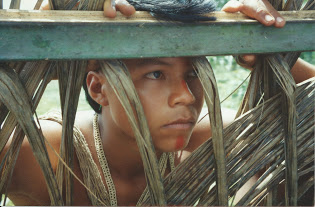 Sequel to the award-winning film about oil companies in the Amazon. 20 years later Big Oil is back!
A  compelling feature-length film that will combine footage from 20 years ago and from the present day, showing the renewed threat to the people and forests in the Amazon. The film will showcase in major film festivals, have a worldwide cinema release, be broadcast globally on television and eventually stream on demand for educational and home viewing.
OUR STORY : Twenty years ago Christopher Walker, Gordon Durnin, Tony Avirgan and Andy Drumm were the first filmmakers to tell the story of the fight against Big Oil in the Amazon basin of Ecuador. Filming over 3 years, our film covered the fight by the Huaorani people to remove the oil companies from their lands and preserve the Yasuni Park – one of the most biologically diverse regions of the world. In the process, it covered the very beginning of the ground-breaking law suit against Texaco/Chevron for failing to clean up oil pollution. Our reporting was featured on ABC News, ABC Nightline, NBC Dateline, BBC and CBC, keeping the story in the headlines. The final film - TRINKETS & BEADS premiered on HBO's CINEMAX REEL LIFE, ARTE FRANCE/GERMANY, SBS AUSTRALIA, ARD GERMANY, SVT SWEDEN among others. TRINKETS & BEADS won many major prizes worldwide and was shortlisted for an Academy Award Nomination - being named an "outstanding documentary " by the Academy of Motion Pictures Arts & Sciences. The film publicized the Huaorani’s struggle around the world, and was instrumental in gaining support for the subsequent moratorium on oil drilling in the Yasuni National Park. Web link: http://icarusfilms.com/cat97/t-z/trinkets.html

"Upsetting and finally, infuriating... a fine work."—Peter Matthiessen, author of At Play In The Fields Of The Lord

THE SEQUEL: WHY NOW? In 2013 Ecuador's President Correa announced an end to the moratorium on oil drilling in the Yasuni Park, opening it - and Huaorani lands - to oil drilling once again. The stage is set for an oil invasion by companies from China, Brazil, Argentina and the USA in conjunction with the state oil company Petroamazonas. U.S. company Halliburton has signed long-term contracts to construct roads and camps, recover oil from existing wells and discover new reserves. Oil production is planned to commence in 2016. Most of the oil is destined for the U.S. (previous oil reserves discovered on Huaorani land were estimated to be worth $1.5 billion - enough to keep cars rolling in the U.S. for 13 days). Extensive oil drilling in Ecuador will not only further destroy the Amazon rainforest and the livelihoods of local people, but also continue our dangerous global addiction to oil - contributing to further global warming. Nowhere in the world are the battle lines on climate change and indigenous rights more sharply drawn than in the Amazon rainforest - where any destruction affects the entire planet. Web link: http://www.theguardian.com/environment/2014/may/23/ecuador-amazon-y...

"It's not just about exploiting oil ..it's about who controls the rainforest. It’s everyone's concern because this is the heart of the world." Moi Enomenga, Huaorani activist

WHY US?: Having first brought it to the attention of a worldwide audience, we have followed this story over the past decades. This means we are in a unique position to return to the Amazon and film the new "oil invasion" as it unfolds over the next crucial 12-24 months.
Crucially, we have been invited by local leader Moi Enomenga and the Huaorani community to document their continued struggle to protect their lands and their way of life. Our new film can play a major role in publicizing the impacts of oil drilling on the peoples and eco-systems of the Amazon, and the local and international struggle to stop it.
With our expertise in producing documentary films on cutting-edge environmental and social issues over the past 30 years, we are confident of success. Our way of working is to make a number of filming trips to document events as they unfold. This will allow us to publish ongoing news stories via global broadcasters and on the web to keep the issue in the headlines. Web link: https://www.facebook.com/trinketsandbeads