Yesterday, UNEP/GRID-Arendal launched a new report on Arctic Biodiversity at COP 10 in Nagoya.
The Arctic region is characterized by some of the largest continuous intact ecosystems on the planet, but is facing increasingly larger threats. These threats include the full range of stressors known from other parts of the world, namely habitat loss and fragmentation from infrastructure and industrial development, chemical pollution, overharvesting, climate change and invasive species infestations.
Many of these pressures are mainly globally driven, including climate change, long-range transported pollution and even invasive species infestations. Others, such as harvesting and fragmentation are directly under Arctic governance, though often driven from demands outside of the Arctic region.
The report: Protecting Arctic Biodiversity: Limitations and strengths of environmental agreements takes a broad view of existing multilateral environmental agreements (MEAs) and examines the role of the global environment in impacting and influencing the efficiency of Arctic MEAs in protecting biodiversity and in sustainable development.
The report allows governing and scientific bodies of MEAs, as well as national decision-makers, to better direct their programmes of work and other activities to address the needs of Arctic biodiversity and the region's local and Indigenous Peoples.
The full report, an interactive e-book and downloadable maps and graphics are available on http://www.grida.no/publications/arctic%2Dbiodiversity/ 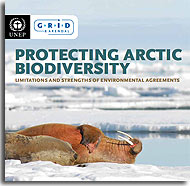