Anyone who follows Brazilian public discussion over a long period will
be familiar with the Amazon conspiracy theory. To outsiders it seems
bizarre enough to be laughed off. However, its persistence and resonance
with a large section of public opinion (and political elites) makes it
no laughing matter for those Brazilians earnestly trying to move the
country to a new mindset regarding this environmental superpower's
unrivalled biological riches. Now a version of the conspiracy -
promoted, puzzlingly, by a Communist congressional deputy - is being
used to justify a proposed loosening of Brazil's environmental
legislation that could, if passed, jeopardise recent advances in the
slowing of deforestation and restoration of ultra-diverse ecosystems.

The theory, touted in various forms over many decades, goes roughly like
this. International concern and pressure regarding the destruction of
the Amazon (and, for that matter, the rights of indigenous groups) is
nothing more than a self-interested plot by, principally, Anglo-saxon
rich nations aimed at depriving Brazil of its sovereignty over the
Amazon territories, preventing the country from developing and getting
their greedy hands on the mineral wealth of the region.

Joined together in the service of this well-organised conspiracy (on which
books have been written) are alleged to be forces as diverse as
international environmental organisations like the World Wildlife Fund
and Greenpeace, the World Trade Organisation, the British Royal Family
and the US federal government. It survives even ham-fisted frauds like
the myth
of a school geography textbook in the United States showing the
Brazilian Amazon as a UN-administered international protectorate - the
text accompanying the map circulated via email was quite evidently not
written by a native English speaker.

Stoked in particular by military figures including senior serving officers, the conspiracy is
regularly resuscitated on the internet, newspaper columns and on TV
discussion programmes. I am personally often asked about it by
well-educated Brazilians, even those inclined towards green views, and
it is periodically fuelled by ill-considered if well-meaning comments
from European or US politicians describing the Amazon as "belonging to
the world" or some-such phrase.

Now, the spectre of international plots to hold back Brazil's development is being raised to support an
attempt in Congress to flexibilise the country's Forest Code -
introduced in 1965, ironically just one year after the US-backed
military coup that kept Brazil's generals in power until the 1980s.

The code, regarded by its supporters as among the most advanced
environmental legislation in the world, imposes well-defined
restrictions on the rights of landowners to develop crops and other
activities on their property. One element, Areas of Permanent
Preservation (APP), defines types of landscape on which native
vegetation must be maintained: for example riverbanks, freshwater
springs, steep slopes and the tops of hills. In addition, the Legal
Reserve (Reserva Legal or RL)is
a fixed percentage of the area of a property (excluding the APP) that
must be preserved. This is set at 80% in the Amazon forest area, 35% in
the transition zone between the Amazon and the Cerrado savanna, and 20%
in other ecological regions. 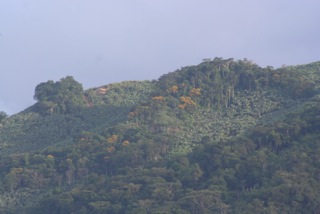 The problem, as a trip to any part of rural Brazil (or even a look on Google
Earth) will confirm, is that the Forest Code is largely a fiction. This
photo I took of bananas marching up steep slopes to the top of the
foothills of one of the most important remnants of the Atlantic Forest,
the Jureia-Itatins reserve in São Paulo state, is a typical example of
how the code is widely flouted with impunity.

Which begs the question of why the ruralistas,
as supporters of the powerful agricultural lobby in Congress are known,
should now be going to such efforts to weaken an unenforced law. The
reason is that executive regulation that would give state agencies the
power to punish those breaking the Forest Code will finally come into
force next year, after repeatedly receding into the future.

Under the proposals now before Congress, there would effectively be an
amnesty for landowners who breached the forest code before 2008. Each of
Brazil's 27 state governments would be given flexibility to vary by 50%
the minimum margin of forest cover required along riverbanks - which
supporters of the code fear would result in an inevitable "race to the
bottom" by authorities keen to please their local farming interests. And
the requirement for the Legal Reserve would be removed from smaller
landowners, which in the case of the Amazon means farms up to 600
hectares (about 1500 acres).

The case for the changes was put to a special commission of the lower house of Congress by its relator, or rapporteur, deputy Aldo Rebelo, of the Brazilian Communist Party, and it is available in full (Portuguese
only) on his blog.

The thrust of the 36-page report is that the current code puts some 90% of Brazilian agricultural producers into a
position of illegality, and that entire sectors such as wine-growing in
the Southern states would be unviable if it were to be strictly
enforced, as vines are largely grown on the steep slopes of the region.
Moreover, it imposes an unfair disadvantage on Brazilian farmers
compared to overseas competitors, where no such code exists to protect
forests. All reasonable-sounding stuff, although the claims can be and
are disputed by those who support the code, while admitting that some
refinements could and should be made.

But what jumps out of the Rebelo report is an extraordinary, rambling diatribe against those who
wish to impede "progress" by limiting deforestation, ranging over
Malthus, Marx and the director of Avatar, James Cameron. The alleged role of international NGOs in promoting the interests of Brazil's Northern competitors is put explicitly and graphically.

"Looking at the efforts of some foreign non-governmental organisations to oppose the expansion of our
agricultural frontier, one must ask oneself ... are they here for our good or our goods?" asks Rebelo.

And after lambasting what he calls the "anthropophobia" of the rainforest campaigners, Rebelo
continues:

"Embarrassed by the evidence of their petty ambitions, the rich nations use the long arm of their NGOs, who disembark in Brazil as bearers of good news in defence of nature, but cannot hide thecause they are really espousing: the interests of the nations where they have their headquarters, and from where they receive their abundant funding.

"The pretence of foreign 'indigenist' and environmentalist NGOs at protecting the [Amazon] territory and
inhabitants makes a mockery of the Brazilian state and people."

The allegation of connivance between foreign governments and NGOs is made more explicit in the case of the Netherlands, which briefly took controlof the North-East Brazilian sugar plantations in the 17th century, and
also happens to be the world headquarters of Greenpeace:

"Shorn of its former military and commercial power, today Holland satisfies itself with hosting and financing its paramilitary arms, the inevitable NGOs, which try to fulfil the role of its old armies and trading
companies." Entertaining stuff, but remember this is an official document of the Brazilian Congress.

What Rebelo is suggesting, and the same has been claimed by agricultural spokespeople on television
and in the press, is that the campaign to maintain and enforce a strongForest Code in Brazil is being masterminded and controlled by foreign agricultural lobbies, principally in the United States, to stifle competition from Brazilian products such as soya, ethanol and bananas. The idea of activists from Greenpeace and the corn barons of the Midwestholding secret meetings to plot against Brazilian farmers may seem a little fanciful, but this does not deter the conspiracy theorists or thewidespread belief in their message.

All of which naturally infuriates the home-grown Brazilian environmental movement that is trying to mobilise public opinion in support of the existing Forest Code, and its effective implementation. In campaign called Exterminadoresdo Futuro, the name given to the Schwarzenegger Terminator movies in Brazil,the group SOS Mata Atlântica (Savethe Atlantic Forest) portrays the ruralistas as chainsaw-wielding vandals intent on destroying what is left of Brazil´s extraordinary biodiversity.

The fear of these groups is that if the Forest Code is weakened, it could reverse recent gains such as
the sharp fall in the rate of Amazon deforestation, and serious attemptsto restore the Atlantic Forest, a global biodiversity hotspot which has already lost some 93% of its original extent.

The vote on Rebelo's proposed changes was originally scheduled for today, Tuesday 15th June,
when Brazil's eyes would have been on matters a little further afield -
like its first match in South Africa, against North Korea. Now it has
been delayed until next week. Watch this space.

This blog is also published on my personal blog site at www.timhirsch.org