Just a note to explain how prawn culture or captive-breeding for a high-demand export market is negatively impacting the bio-diversity of Chilka Lake - the setting
for the story below. ‘Culture’ against traditional ‘capture’ method – using country
boats, traps and nets, gives quick and rich returns but is highly
un-sustainable. Shoreline acres are barricaded by bamboo poles wrapped with
small mesh nets or low mud embankments are raised to create prawn breeding
ponds. Inlets are closed after seedlings enter with the high tide. Except the shrimp
fingerlings which are allowed to grow in these ponds, almost 90 percent of
other seedlings that also enter with the tide are regularly thrown away. 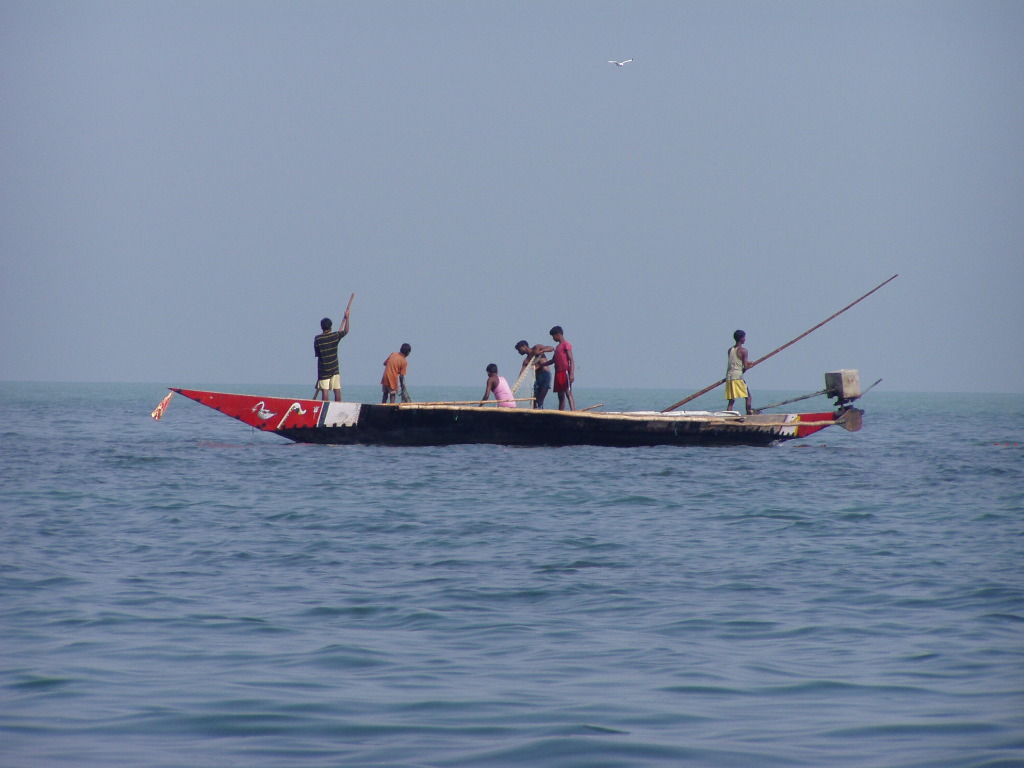 BHUBANESWAR, India, June 16, 2010 (IPS) - Basudev Dalai, 43, never thought that the fishing village where he has lived all his life and which has been
home to generations of fishermen like him would be embroiled in violent clashes
over the very source of their livelihood.

"The stakes are so high people are even prepared to kill those they have
lived with for generations," says Dalai, a native of Alupatna village near
Chilka Lagoon along the Bay of Bengal in eastern India.

Chilka is Asia’s largest saltwater lagoon and a wetland of international
importance under the Convention on Wetlands, otherwise known as the Ramsar
Convention, an international agreement on the sustainable use of wetlands among
the member states.

A day after the fight erupted and before police searches began, the thousand or
so inhabitants of the warring communities fled to nearby villages in fishing
dinghies. The assailants remain at large.

Eran Dalai, a 25-year-old native of Alupatna, says the fight started when his
village fishers found their shrimp stakes and net enclosures destroyed.
"Our villages had earlier engaged in violent clashes at least five times,
but this was the worst so far," he adds.

Before this month’s bloody incident, police had recorded a total death toll of
60 from similar attacks that began in 1999.

Local police inspector in-charge Debi Prasad Das says over 300 crude bombs and
200 rounds of bullets were used during this month's attack that went on for
five hours before police managed to put the situation under control.

Clashes over fishing rights in Chilka Lake have been escalating both in number
and intensity, says Biswapriya Kanungo, legal adviser to Orissa-based Chilka Traditional
Fishers’ Federation whose membership runs into thousands. "Skirmishes or
serious encounters occur once a month on average," he adds.

Increasing population, overfishing, depleted fish stocks, and environmental
degradation brought on by a host of factors, including siltation, as well as
the advent of commercial prawn farming in and around Chilka, have all taken
their toll on the lake and its rich biodiversity.

The seriousness of the situation confronting the lake and its inhabitants has
resulted in head-on clashes among the fishing villages.

"The number of active fishermen has increased exponentially, so have
fishing boats," says Durga Prasad Das, chief functionary of Pallishree, a
local environmental organisation. "The dispossession for Chilka’s
traditional fishers began when the global export market discovered its prawn
potential in the late 1980s."

As investors, reportedly including politicians, poured their resources into the
prawn trade in Chilka, local non-fishers were brought in as their fronts, says
Das. Between 2000 and 2008, the number of fishermen in the area jumped 40
percent from 122,339 to an estimated 200,000, according to official fisheries
data from Orissa and based on a 2008 report by the India Planning Commission.

Traditional fishers – so called because they use traditional, low-tech fishing
methods –complain that fishing fields have been eaten away by the rapid growth
of prawn culture ponds.

Anadi Behera, general secretary of the Traditional Fishers’ Federation, says,
"The seed of conflict, however, lies in the lack of clear demarcation of
leased fishing waters." Unauthorised and illegal prawn enclosures arising
from an unregulated prawn industry encroach on the fishing grounds.

"We regularly demolish enclosures in the day time. Shrimps move in the
night, so that by then the enclosures are up again," says Chittaranjan
Mishra, additional chief executive of Chilka Development Authority, a state
body mandated to ensure the lagoon’s sustainable management.

"Until 1980s traditional methods used country boats, nets and bamboo
traps. Catches were divided between fishers, boat and net owners. There was
community cooperation," says Dalai, the fisherman. Those days are all but
gone.

Das describes how resource competition around the lake has driven unsustainable
fishing, which is characterised by the use of motorised boats, fishing stakes
and nets, gill and seine nets, even pesticide to maximise one’s fish catch.

Some 30 percent of traditional fisher families have become poorer, many of them
in perpetual debt and are resorting to migration, says Das.

"Women have been hit hardest," says Maghi Mantri, 62, who lives in
Panda Pokhari village on the Chilka banks. "We used to earn well from
processing and selling salted fish. Not any more"

As fisherfolk are forced deeper into poverty, many of them have had to sublease
their leased fishing fields to shrimp and prawn culturists while they poach in
areas leased to other fishers, often spawning conflict.

Kanungo, the legal counsel, says fishers are forced to sublease their fishing
zones as they can no longer afford the exorbitant lease premiums. They either
intrude into someone else’s area or work as daily wage earners in their own
leased areas now run by rich traders under a sub-lease agreement.

"Once fishery is depleted in Chilka, the rich prawn traders will move on
to greener pastures. What will the son of the soil survive on?" asks
Behera of the fishers’ federation.

According to the United Nations Environment Programme’s ‘Green Economy Report’
preview, released in May, 30 percent of fish stocks worldwide now yield only 10
percent of their former potential. Virtually all commercial fisheries will have
collapsed by 2050 if trends continue, states the report.