Umande Trust together with other Civil Society Organisations CSOs seeks to demonstrate how installation of improved bio-centres in slums can be focal points for showcasing the green agenda, urban renewal and gradual slum upgrading.

Through Integrated Urban Environmental Planning (IUEP) program, Umande focuses on a 60m radius area of influence around a bio-centre where individuals and groups can mobilize themselves, share information, plan together and promote green basic urban services.

They are determined to improve sanitation, agro-forestry and solid waste management in the slums. They make sure slum dwellers take the lead role in slum upgrading by identifying their needs and proposing solutions themselves.

According to IUEP Project Officer, Ms. Aidah Binale, "the programme is part of the strategy to contribute to vibrant, dignified and secure urban living environments, free of slums".

Aidah anticipates an upgraded slum, even in areas outside the 60m radius. "Implementation of the planned interventions will benefit the community through better planned environments, access to improved sanitasion and access to information" . She explains.  Adding, there is need for capacity development in management, sanitasion  services and  appreciation of rights based advocacy.

Aidah says,"the community has been involved in mobilizing, planning, dreaming and problem identification.  Collection of socio-economic data, mapping their surrounding, designing and presenting feedback". She adds, the overall objective of the programme is to support communities at 60m radius to prepare integrated environmental plans as a basis for improving the livelihoods and living conditions. 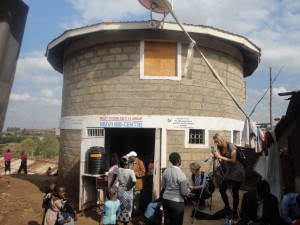 A sanitation block, which generates electricity through

its exreta, and cooking gas. The facility is dubbed bio-center

Umande Trust employs a participatory planning approach emphasing on the community participation, partnership with all stakeholders, and other key players. Jasho Letu planning committee chairman Mr. David Kihara says  "the community is best suited in identifying  their social and settlement  problems". He believes the community only needs to be guided to develop intervention strategies for their own slum improvement.

Kihara led the community to conduct a Field survey in Katwekera Village, Kibera to indentify the spatial data on what is existing and areas of interventions. The data collected shows the physical elements within the settlements such as roads, and rail networks, natural features such as rivers / streams, vegetation, and valleys. This data is assisting communities and Umande Trust to appreciate existing conditions upon which planning and interventions should be based.

Out of the total 76 structures located within the project area only 18% have access to water kiosks / point located in close proximity to them. 82% of the structures don’t have direct access to water services. Approximately 49% harvest rain water using their roofs.

A 20 litre container costs between Kshs 3 and 10 (during shortage). Unreliable water supply is attributed to the vendors who deliberately fail to supply water in a bid to charge higher prices.

Less than 50% of structures within the project have on-site sanitation facilities. The survey revealed that less than 25% of the toilets were not in use due to their bad conditions. Lack of proper bathrooms resulted in many residents taking baths in their small rooms.  Jasho Letu Bio-centre charges Kshs 3 per visit and Kshs 10 for per shower.  The survey, revealed 59% of the residents use the bio-centre.